The flash floods in Chamoli district of Uttarakhand on Feb. 7 swept away the Rishiganga Hydel Power Project and caused a good deal of damage to the Tapovan Power Project. Besides the damage to the projects, the glacial burst killed at least seven people. More than a hundred workers are still trapped in debris and slush. Thirteen villages on the border with China remain cut off from the rest of the country. Search and rescue teams are working overtime to rescue people, but with each passing hour, the hope – that they will be alive – only becomes meager.

The tragedy is a grim reminder of the fact that nature has its own way of getting back to people playing with ecology. Experts and ecologists have warned for a long time against stone quarrying, blasting of mountains and digging of tunnels in the base of the fragile mountain system for the under-construction dams on Rishiganga and Dhauli Ganga rivers. Not only with the current projects, over lust for development discourse – roads, dams, power projects etc. – has led to massive damage to the mountains and high-altitude regions. Landslides, avalanches and flash floods are not new to the mountains. Each time they occur, they devour precious lives.

Memories of the deadly floods in Kedarnath in 2013, which killed about 5,700 people, are still alive in the minds of people in Chamoli. On Feb. 7, when they saw the swollen Rishiganga river, they began praying to God to save them. Chamoli district disaster management officer NK Joshi said panic gripped residents after the incident. A rescuer of the State Disaster Response Force said people feared that a Kedarnath-like tragedy may happen again. Chamoli residents said they and environmentalists had protested two power projects in the area.

The Himalayas are a young and fragile mountain system. Any change in its rocks can trigger landslides. Unfortunately, the development discourse does not factor in frequency of landslides, snow avalanches and lake bursts in areas where big earth-moving machines and loads of dynamite begin spewing destruction.

According to a report in the Hindustan Times, the data from the Indian Space Research Organisation’s resource centre on Himalayan glaciers reveals that melting of the glaciers in the Central Himalayan catchment area, where Chamoli falls, has increased in the first 20 years of this century. “A research based on the study of 650 glaciers spanning 2,000 kms and published in jScience Advances in June 2019 showed that glacial melting has doubled since 2000 as compared to 1975-2000. The faster melting of hundreds of Ganga glaciers would impact the livelihood of close to 600 million people living in the Ganga river basin from Uttarakhand to Bangladesh, and India’s economy,” the newspaper said.

Villagers of Raini in Chamoli, the epicentre of the Feb. 7 disaster, had petitioned the Uttarkhand High Court in May 2019 against illegal stone quarrying on Rishiganga river bed, blasting of mountains and improper muck disposal by contractors engaged in construction of the hydel project. The district magistrate of Chamoli found some of the allegations true in his report to the high court.

According to DP Dobhal, a glaciologist formerly associated with the Dehradun-based Wadia Institute of Himalayan Geology, there are more than 1,000 glaciers in Uttarakhand; almost all of them are receding. Most of them have debris cover. When glaciers retreat due to rising temperature, the snow melts but the debris remains.

For governments, development is more important. Construction of hydel dams and wider roads are more important. But in doing so, no one takes into account scientific research for environmental impact assessment. Therefore, every now and then, nature strikes back. Damage to the local ecology, loss of forest cover for building dams and roads proves fatal. Uttarakhand has 16 dams and another 13 are under construction. The state government has proposed another 54 dams to harness hydel energy potential of the rivers in the upper reaches. Geologists say every time the mountain system is drilled and green cover removed, there will be an irreparable damage.

Climate change aggravates the situation. A 2019 report by Kathmandu-based International Centre for Integrated Mountain Development said that 36% of the volume of glaciers in Hindu Kush Himalayan (HKH) region will be gone by the end of 2100 if the world manages to keep the temperature rise within 1.5 degrees Celsius as mandated by Paris Climate Agreement. Though the disaster region may not strictly fall in the HKH, its findings confirm what has been said in various studies on faster melting of glaciers feeding the perennial Ganga from the upper reaches of Uttarakhand and China.

There is enough data to suggest that severe flash floods due to glacial melt in Uttarkhand have increased post-2000 and if the present Himalayan destruction continues, it would rise further and would be fiercer. If we don’t stop this ecological catastrophe, the nature will strike back. Kedarnath and Chamoli weren’t the first; they won’t be the last. And it may be worse the next time.

The only option that we have is to save the Himalayas. Let’s not get blinded by the development discourse and think about a sustainable model. No one is against development, but development at what cost? If we keep conducting blasts in the mountains and keep making them weak, can we ever avert tragedies? In a world with a changing climate, our hunger for development is causing havoc to the mountain’s ecology. Let’s stop it now. Tomorrow may be too late. 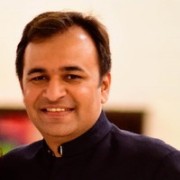